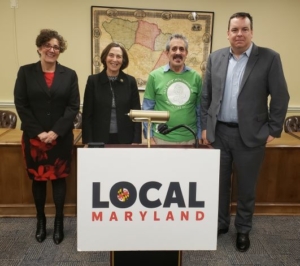 On Jan. 17, LOCAL (Let Our Communities Act Locally) Maryland, a coalition consisting of advocacy organizations from across the state, committed to protecting the health, the environment and economic wellbeing of Maryland citizens, introduced its 2020 legislative agenda.

The coalition will support a bill that will be introduced by Maryland Association of Counties (MACo), which would ensure that local jurisdictions would have assumed authority unless otherwise stated (implied preemption).

“This bill will add clarity to this process,” said MACo executive director Michael Sanderson. “Rather than having local laws struck down quietly in court through litigation, we’ll have those debates in the open through legislation. That’s how public policy ought to get done.”

LOCAL Maryland will work to prevent potential preemption amendments in state legislation involving pesticides. In 2019, the Maryland Court of Special Appeals rejected an argument that local governments are impliedly preempted from regulating the use of pesticides and upheld a Montgomery County pesticide regulation. Three times in the past decade, the pesticide industry has attempted to preempt pesticide laws in the state and have failed.

Alan Cohen is a founding member of Safe Grow Montgomery, an all-volunteer group of residents, working to end exposure to non-essential lawn pesticides in Montgomery County.

“Safe Grow Montgomery is concerned that the chemical industry may approach state legislators during this General Assembly session. Their goal is to preempt local ordinances involving pesticides,” said Cohen. “Our group is excited to partner with LOCAL Maryland to allow the voices of Maryland localities to be heard. Silencing these voices endangers the health of our citizens.”

In 2019, advocacy organizations across Maryland — including 1199 SEIU, the Maryland State Conference of the NAACP, the American Heart Association and National Employment Law Project — launched LOCAL Maryland. The coalition pays special attention to state legislation that would take away the ability of local governments to protect residents’ health and quality of life. During the 2019 General Assembly, LOCAL Maryland successfully advocated to keep preemption amendments out of the state’s minimum wage bill.

Sugar Free Kids Maryland executive director Shawn McIntosh leads the efforts of LOCAL Maryland. “Our coalition believes that every Maryland community has the right to healthy families, a clean environment and good jobs,” said McIntosh. “By supporting MACo’s efforts to ensure that local governments can preserve the right to assume authority, we can make that happen.

It is also our goal to protect local laws involving pesticides so that each of our state’s unique localities can govern in a manner that suits them best. One size does not always fit all.”

“Preemption has been a troubling trend,” added Sanderson. “Legislatures have been deciding that one size fits all and shutting down communities’ ability to react to their own needs. We don’t want to see that catch fire in Maryland and LOCAL Maryland brings together voices from across the state to stand up for our communities.”

Want to join the discussion?
Feel free to contribute!