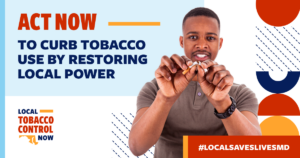 Annapolis, Md. – On Thursday afternoon, the NAACP Maryland State Conference (MSC), American Heart Association and LOCAL (Let Our Communities Act Locally) Maryland, members of the Maryland Tobacco Free Coalition, announced their support for the Maryland Local Tobacco Control Bill (H.B. 1011, S.B. 410). This legislation would restore the abilities of localities to enact and enforce local laws regulating the sale and distribution of cigarettes and other dangerous tobacco products to fit the specific needs of their communities. Passage would ultimately improve the health of all Marylanders.

Successful passage of this legislation would overturn a contentious 2013 court ruling, Altadis v. Prince George’s County. That bill stripped Maryland’s local governments of their power to fully protect residents from the devastating effects of tobacco use and prevented them from passing new laws regulating tobacco products.

The bill is sponsored by Sen. Ben Kramer (D-Montgomery County) and Del. Sandy Rosenberg (D-Baltimore City). “The tobacco industry not only wants to addict the next generation of Marylanders, it needs to do so in order to continue delivering profits for its shareholders,” said Rosenberg. “Maryland’s county and city governments should be able to tailor local tobacco control laws to fit the needs of their jurisdictions. The Maryland Local Tobacco Control Bill recognizes that local governments should also be able to fight back against big tobacco and ensure the health of their residents.”

Smoking-related illnesses are the No. 1 cause of death in the Black community, surpassing all other causes of death, including AIDS, homicide, diabetes and accidents. Researchers found that stores in predominantly Black neighborhoods were up to 10 times more likely to display tobacco ads inside and outside than retailers in areas with fewer Black residents.

“Historically, the NAACP has led Grassroots outreach and empowerment in an effort to heal families and communities,” said NAACP Maryland State Conference President Willie Flowers. “For years, broken systems have created broken communities and while some focus has been on the people it should glaringly be on the broken system itself. Today, our goal of educating impacted communities about tobacco

Given the COVID-19 pandemic and its devastating impact on the heart, lungs and other vital organs, curbing tobacco use has heightened in urgency.

Sugar Free Kids Maryland executive director Shawn McIntosh leads the efforts of LOCAL Maryland. “Our coalition believes that every Maryland community has the right to maintain healthy families,” said McIntosh. “Taking away the ability of local governments to protect their residents’ health and quality of life hurts the residents of this state. The Maryland Local Tobacco Control Bill would allow communities to create laws that fit their needs and allow their residents to thrive.”